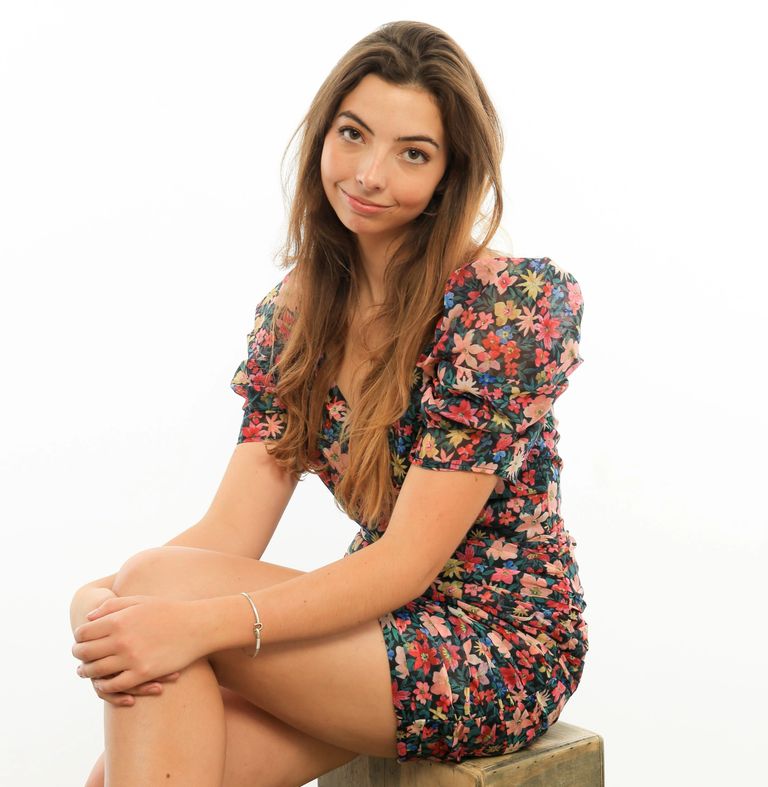 Hi, I’m Chandler Moseley. I am 17 and I love to design and sew clothes. I started sewing when I was very young. I made my first “purse” when I was four, even though it was is barely a purse. It was two scraps of fabric from my grandma’s sewing box that I stitched together with a piece of green ric-rac as a handle. I made my first pattern shortly after completing this purse. I cut massive scraps of white butcher paper and taped them together to form a “dress pattern.” In fact, I have made my own patterns for nearly every design I have created- I have only used a pre-made pattern for three dresses and tweaked those three patterns in some way to make the dress "my own." Creating things has always felt natural to me. I feel it is what I do best.

My mother is definitely a huge part of the reason I love fashion. She was the one who saw my little scrappy purses as works of art and framed my first sketches that I drew in crayon. She bought me my first sewing machine, a small blue and purple plastic toy that arguably changed my life. I hand sewed, stapled and glued all of my “clothes” until I received this toy sewing machine when I was six. It changed everything. I was amazed by how fast I could forge seams and make patterns. Later, my mother enrolled me in sewing classes when I turned seven. In class, I made my first real dress. It was wearable this time, too. I remember making my own tag and sewing it on the back of the dress. I felt a connection to the piece. I felt proud and accomplished.

After I made that dress, I knew I wanted to be a fashion designer. When I sew, I have a voice. Each piece is my own. No one else has an input. It is an opportunity for me to express my emotions and tell a narrative through my collections.

As I grew up, my designs grew up too. If you look at my archive, not all of my clothing is something I’d say I’m proud of, but I think each piece I create pushes me forward. Sewing has taught me a lot of things, but patience is the most important lesson I have learned. It takes a lot of determination to finish a garment from start to finish and stay on track. I have to improvise and adapt very frequently when I’m sewing and I often run into obstacles. For example, something will rip, a piece might get caught in a hem, or a seam could pucker. But finding solutions and keeping my persistence and dedication to completing each piece with the same care I started has shown me how rewarding sticking with something can be.

Fashion and designing has been an outlet for me for as long as I can remember. I attended my first fashion show when I was three and my second when I was four. My Nana used to model and it was such a special occasion to attend her shows. I have been attending as many fashion shows and exhibits as I can. When I was 13, I attended the Oscar de la Renta fashion show in Lake Tahoe and after the show I was introduced to their head creative director, Peter Copping. A few months later he offered me an internship at the company's headquarters in New York for that summer. He didn't realize I was only 13, so after they discovered that small detail, they said I would have to wait until I was 17 because I was too young. When I was 14 I submitted my designs to a television series called Project Runway Junior (Season 2). There were over 300 children between the ages of 13 and 17 who auditioned and I made it to the final round. (They could only take 12 contestants and I was in the Top 20.) I tried to audition again the following year for Season 3, but the show was cancelled. When I was 15, I was offered a job at Nordstrom by their premiere stylist and top sales associate. I worked full-time with her all summer in the company's Individualist department and had to be well versed and knowledgeable in high-end brands such as Vince, Rebecca Taylor, Joie, and Theory. I was on the Leader Board for Top Sales throughout the entire store twice that summer. When I was 16, I volunteered at a sewing camp that I attended when I was younger and also taught sewing lessons to children in my neighborhood. That same year I also worked for Katja Tamara, a stylist and accessories design company. I helped the owner style outfits on styled shoots, organize her inventory, shoot imagery and post on her social media page, and assisted her with selling her products at local events. I also worked independently as a Closet Consultant and helped women purge their closets and update their wardrobes. Last summer, when I was 17, I was offered an eight week internship in New York for Adam Lippes, a luxury designer and former Oscar de la Renta creative director. I moved to New York, worked over 40 hours a week, and was able to learn so much. Eventually, I was able to assist with fittings which is a very prestigious role as an intern and only a few are selected. I was their youngest intern and was asked to stay on longer, I ended up working there for 10 weeks and loved every second of it!

I love to use fashion to bring attention to things I care about. For example, I started my “Bullying is Never in Fashion” tee shirts so I could gather support and spread awareness for a cause I am passionate about. (You can read more about this by clicking the banner at the top of the page.) I am also incredibly passionate about the environment. If working in the fashion industry weren’t an option, my next career choice would be pursuing a career in marine biology or oceanography.

My love for the ocean has extended as long as my love for fashion. I love making clothes out of recycled materials and recently I have been researching fabrics that are composed of pollution from the Pacific Ocean Gyre. I have designed a collection of swimwear, a branch of clothing that is fairly foreign to me, that I want to make out of Econyl. Econyl is a swimwear fabric made from plastic in the Pacific Ocean Gyre, which is essentially an island the size of Texas that is entirely made of pollution, floating in the middle of the Pacific Ocean. I never knew what the Pacific Ocean Gyre was until I witnessed a Keynote Speaker talk about it at my grade school, Marin Country Day School. I hope to compose this collection and sell the swimsuits soon so I can donate a percentage of the profits to Oceana and Ocearch, two organizations that help the environment and also spread awareness through fashion. This project combines the two things I am most passionate about: fashion and the environment.